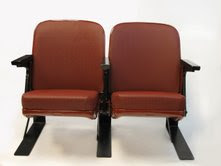 SPECTRUM SOUVENIR SEATS AVAILABLE TO OWN BEGINNING
ON NOVEMBER 9

Comcast-Spectacor will begin taking orders for fans wishing to own souvenir seats from the Spectrum on Monday, November 9 at 10 a.m., exclusively through RememberTheSpectrum.com or by phone at 215-952-5691.

“The Spectrum is a very special place for so many millions of people,” said Comcast-Spectacor Chairman Ed Snider. “I know how passionate people are about the Spectrum and we’re excited to offer our fans a chance to now own Spectrum seats.”

“The Spectrum will live forever,” added Comcast-Spectacor President Peter Luukko. “Our fans can keep the Spectrum going in their home, their office, or any other place they would like by owning the actual seats from the Spectrum.”

Philadelphia Flyers and 76ers season ticket holders, Wachovia Center premium seat customers, and members of the Flyers and Sixers email clubs, Wachovia Complex Cyber Club and the RememberTheSpectrum.com email club will have priority in purchasing souvenir seats from the Spectrum. These priority customers will be notified in advance by email.

Archer Seating Clearinghouse of Vineland, NJ, is working with Comcast-Spectacor on processing the sale of the seats. Orders will be filled on a first-come, first-served basis. There are no guarantees on specific seat location requests. Seats will be available for pick-up at the Spectrum beginning on Monday, November 30. Customers can select their pick-up date and time when ordering.

In addition to owning seats from the Spectrum, fans can also purchase the complete photographic history of the Spectrum entitled “God Bless the Spectrum” for $24.95 or a piece of the basketball court for $76 (3-inch by 5-inch piece) or $176 (10-inch by 10-inch) at RememberTheSpectrum.com.

Demolition of the Spectrum, which is expected in the spring, will make way for Philly Live, a spectacular new retail, restaurant, and entertainment district. Cordish Company, of Baltimore, MD, a world-renowned developer of similar projects throughout North America, is partnering with Comcast-Spectacor in Philly Live.